The voice of the media

Media. Mass communication.  A powerful vehicle to deliver messages to the masses quickly. Arguably one of the most powerful influences on society, vital in developing societal norms. Second only to the Government, which has the power to dictate media activity, or at least we are led to believe it does.

In the Australian media recently we have seen a few examples of the power of our media outlets. At what point does their quest for quality coverage cross the line? Below are a few productive and not so productive outputs of the media from a social perspective.

Distributing information and images / footage that may lead to a rapid arrest of a criminal or person of interest, enhanced recently through the use of social media by the police.  This is in our favour as we want to ensure a functional society, eradicating anti social behaviour as quickly as possible.

The media heavily influences public perception of the effectiveness of Government. The new 1:30am lock out and 3am last drinks laws were primarily fuelled by community outcry over the continued hospitalisation and in some cases death of young children, the victims of callous drunken attacks.  Government acted swiftly to pacify the community that ‘something would be done’ – a campaign which the community would never have known about without extensive media coverage.

Media coverage enables us to understand and read about challenges and achievements experienced by members of society beyond our own location.  Its great to hear what may be happening in the world of our domestic and International counterparts and where we can obtain learnings.

At the end of various articles I find it quite useful to see relevant contact points e.g. an article on Cancer call Cancer Council Helpline.  An article relating to mental illness try Lifeline etc.

Driving forward a progressive society focused on marriage equality is another role of the media. 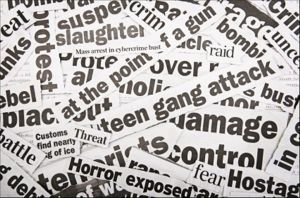 There has been that much media coverage on the Corby case the past decade I think we could have educated every Australian on human rights atrocities the world over by now.  Is this of value to us as society? Perhaps as a deterrent, which wouldn’t require a decade of media coverage.  The implications of ‘excessive Corby coverage’ has been far reaching with the Indonesian Government threatening to revoke Corby’s parole and The Australian Federal Police raiding the offices for information on a potential interview deal.

Marketers are familiar with the value unpaid media exposure gives their product due to its vast reach and timeliness of message distribution. This in turn has the counter effect of negative publicity which can be damaging to a brand and business.  For example, the recent Qantas redundancy coverage.  Yes Alan Joyce could have made different business decisions earlier and Qantas may be in good shape today but life is full of could have, should have, would have but didn’t.  While some industries experience challenges based on the evolution of society e.g. car manufacturers others experience dramatic growth e.g. technology firms.

The vast majority of media articles are negative e.g. about crime, misfortune etc.  How does this impact society? What are the implications of all this negativity? Is it possible to become tunnel visioned? thinking we are living in a crime filled society when in fact the stories we read represent only a small percentage of the activities of Australians.

We recently saw the exposure of the suicide of Charlotte Dawson.  A media personality renowned for a very public battle with depression.  Up until very recently media outlets did not publicise suicides for fear of suicide contagion. I assume this change the past year or so is in aid of mental illness to drive greater awareness and to publish the support services available.

Can journalists disclose ‘the truth’ about anyone who is a major shareholder / owner / sponsor / regulatory authority (e.g. Government) or do they adopt a second set of principles to remain loyal and to keep financial incentives in tact? Are all messages from qualified sources?

Communist societies control messages so as not to distort desired public opinion for example, North Korea.  Is this beneficial to society? Should we be grateful for the freedom of speech we see from our writers today?

Mass media has a powerful voice – the key is how you use that voice and who determines what messages are most productive for society. Perhaps the answer is better ethics training for all journalists as it appears they are the key determinants for the mass communication received by society which in turn shapes our decisions.

8 thoughts on “The voice of the media”